When it comes to digital accessibility, complying with the letter of the law shouldn’t be your only goal. Technology changes quickly; the law changes slowly. However, litigation can leapfrog existing regulation and establish precedents that leave your institution vulnerable.

To be safe, you need to be able to prove that your institution is making good-faith efforts to stay current with digital accessibility technologies. Accessible is not a legal firm, but we can teach you to follow best practices regarding accessibility legal issues so that you’re not unduly exposed.

Who is Affected by Digital Accessibility Requirements?

In 1998, Congress amended the Rehabilitation Act, which covers any institution that receives federal money, such as government offices, federally funded nonprofits, public schools and institutions of higher education, to include rules for electronic and information technology.

Private institutions are exempt from 508, 504 and Title II. However, the rest of the ADA is still in force. As digital accessibility technology changes so frequently, judges and litigators may look to federally funded institutions for best practices. Thus many private institutions think that it’s prudent to adopt similar standards.

Title III of the ADA states that private entities that operate public accommodations, such as hotels, restaurants and retail stores, have accessibility obligations as well. As a matter of fact, retail chains have been sued over inaccessible websites more than any other kind of business, and have paid the biggest settlements.

Banks and other financial institutions should also be aggressive about maintaining and improving digital accessibility. They need to make sure that their sites stay accessible, especially when integrating new technologies, such as Venmo.

Avoid a Pattern of Discrimination, or even the Appearance of One

The important thing is to have a viable process in place to evaluate, procure, install and maintain assistive technologies. Not having a process, rejecting all requests for new technologies, or arbitrarily accepting some requests and rejecting others, could be interpreted as a pattern of discrimination that could leave you open to a lawsuit.

What Constitutes an “Undue Burden”?

No institution has to provide technology to assist every type of disability in every single instance. The standard is whether doing so would create an “undue burden.”

Undue burden is determined on a case-by-case basis. Many factors are involved, but the size of the institution and the number of people who affected are two of the most important. For instance, it would probably not be an undue burden for a school with 50,000 students to spend $500,000 on assistive technologies for 5,000 disabled students. However, it would be an undue burden for a school of 1,000 students to spend the same amount for 10 disabled students. 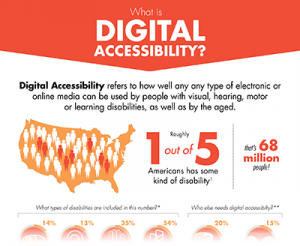 Download our Free Accessibilty Poster
Send this to a friend